Will, Imagination, and Reason
Babbitt, Croce and the Problem of Reality 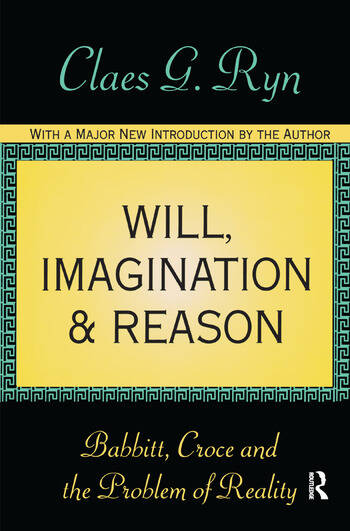 Will, Imagination, and Reason: Babbitt, Croce and the Problem of Reality

Will, Imagination, and Reason sets forth a new understanding of reality and knowledge with far-reaching implications for the study of man and society. Employing a systematic approach, Claes Ryn goes to the philosophical depths to rethink and reconstitute the epistemology of the humanities and social sciences. He shows that will and imagination, together, constitute our basic outlook on life and that reason derives its material and general orientation from the interaction between them.

The imaginative master-minds—novelists, poets, composers, painters, and others—powerfully affect the sensibility and direction of society. Sometimes a distorting, self-serving willfulness at the base of their visions draws civilization, including reason, into dangerous illusion. More penetrating and balanced vision and rationality spring from a different quality of will. Ryn explains the kind of interplay between will, imagination, and reason that is conducive to a deepened sense of reality and to intellectual understanding. He argues that human life and self-knowledge are inescapably historical. In developing his dialectical view of intellect, he draws from Irving Babbitt, Benedetto Croce, and other philosophers to refute positivistic, formalistic, and ahistorical theories of knowledge and to develop his alternative.

Advancing a systematic epistemological argument, Ryn throws much new light on the nature of reason but also on central issues of ethics and aesthetics. This trenchant and original work is indispensable to philosophers, social, political and cultural theorists, literary scholars, and historians.