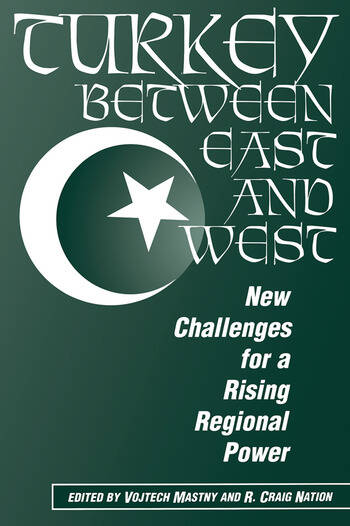 Turkey Between East And West: New Challenges For A Rising Regional Power

As a rising regional power in the critical borderland between Europe and Asia, Turkey has been more challenged than its neighbors by the disintegration of the Soviet Union and the break-up of Yugoslavia. A secular Muslim nation with a history of involvement in European affairs and some with Western international structures, Turkey is positioned to play an influential role in areas with which it shares both ethnic and religious affinities. Building on what is perceived as a successful model of political and economic development, Turkish leaders are promoting regional economic cooperation and advocating new approaches to security in the area. However, their efforts have been hampered by persistent economic deficiencies and by imperfect democracy in Turkey itself.In this volume, experts from Turkey, Europe, and the United States address the key aspects of Turkey's multifaceted role in Europe, its ethnic and religious ties to Central Asia and the Balkans, the Cold War legacy, the quest for a new security role in the region, problems of political modernization, and strategies for future economic development and regional cooperation.

"List of Tables, Preface, The Ottoman Rule in Europe From the Perspective of 1994, Turkey and the West Since World War II, Turkey in the New Security Environment in the Balkan and Black Sea Region, The Turkic and Other Muslim Peoples of Central Asia, the Caucasus, and the Balkans, Developments in Turkish Democracy, State, Society, and Democracy in Turkey, The State and Economic Development in Contemporary Turkey: Etatism to Neoliberalism and Beyond, Black Sea Economic Cooperation, Turkey and the European Union: A Multi-Dimensional Relationship With Hazy Perspectives, Turkish Communities in Western Europe, About the Editors and Contributors, Index, About the Book "

Vojtech Mastny is a fellow at the Woodrow Wilson International Center for Scholars in Washington, D.C. R. Craig Nation is in the Department of National Security and Strategy at the U.S. Army War College in Carlisle, Pennsylvania.