Trade, Urbanisation and the Family
Studies in the History of Medieval Flanders 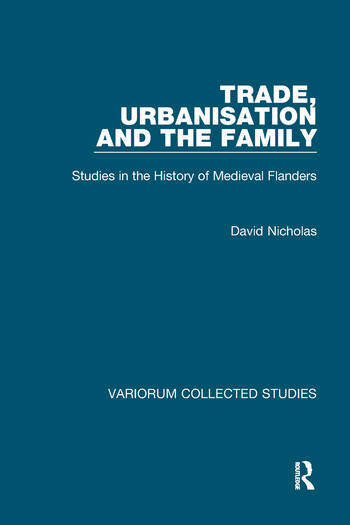 Trade, Urbanisation and the Family: Studies in the History of Medieval Flanders

Flanders, best known for its large cities and export-grade woollen cloth, is the setting for these articles. Professor Nicholas here emphasises the region's broader importance in the economy of medieval Europe as a focus of demand for grain and industrial raw materials. Imports to supply the bloated internal markets were more important in establishing the Flemish cities and creating the capital base of their elites than were cloth exports, which by the 14th century were being undercut by competitors from England and Brabant. The second part of the book looks at the turbulent domestic politics of the Flemish cities, conditioned by a network of nuclear and extended families whose personal antagonisms and heightened consciousness of honour led to decimating vendettas of a severity once associated mainly with Italy. It also examines the mix of urban and rural interests that characterised the elite, showing for instance that the famous van Arteveldes were as noteworthy in the swamps of northeastern Flanders as in the streets of Ghent.

Contents: Economic reorientation and social change in 14th-century Flanders; The English trade at Bruges in the last years of Edward III; The Scheldt trade and the Ghent War of 1379-1385; Settlement patterns, urban functions, and capital formation in medieval Flanders; Of poverty and primacy: demand, liquidity, and the Flemish economic miracle, 1050-1200; Crime and punishment in 14th-century Ghent; Weert: a Scheldt polder village in the 14th century; The marriage and the meat hall: Ghent/Eeklo, 1373-75; Index.

'Nicholas’s collected essays present the economic...history of Flanders in a thought-provoking and innovative form.' Journal of Urban History, vol. 26 no. 3