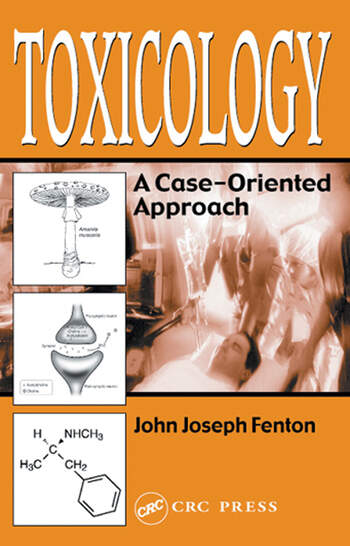 Intriguing anecdotal pedagogy, like the alleged arsenical poisonings of Napoleon and President Taylor and the probable mercury overdose of Isaac Newton, is one of the things that set Toxicology: A Case-Oriented Approach apart from other toxicology texts. Based on an undergraduate-graduate combined toxicology course at West Chester University, this innovative text captures readers' interest by combining modern case studies, historical cases, and hundreds of illustrations and tables. Each chapter presents several case scenarios that involve the reader with questions about diagnosis, testing methods, treatment, and other pertinent information.

TOXICOLOGY FOR THE LABORATORY AND THE EMERGENCY ROOM

In an easy-to-read style, this book covers the major organ systems and reviews the effects of toxins in each system. Most contemporary books are almost entirely clinical or entirely analytical. Toxicology: A Case-Oriented Approach treats each area extensively to benefit students and professionals who need to know aspects of both. It describes diagnosis and treatment of each specific poisonous exposure and discusses chemical basis and the laboratory testing of toxins. This dual perspective, coupled with the book's interesting narrative approach, lets readers quickly absorb the information they need to understand toxicology in the laboratory and in the Emergency Department.

A high school Chemistry student brought home some orange crystals for his science project. Unfortunately, they were not stored in a safe area and the student's two-year-old brother ingested approximately 1 gram of the crystals. The child immediately vomited an orange tinted material and his parents brought him to a local emergency department. Gastric lavage was attempted and ascorbic acid was provided intravenously. The patient was then transferred to a large, regional children's hospital.
Vital signs at this time (three hours post-ingestion) showed normal temperature and blood pressure and moderate elevations of pulse and respiratory rate. Liver enzymes, renal function tests, and coagulation studies were all within normal limits.
The child's condition deteriorated and he required intubation. He was given ascorbic acid as a continuous intravenous infusion. Diuretics were provided and a double volume exchange transfusion with 1.6 liters of whole blood was conducted. The patient exhibited some improvement from these therapeutic steps.
Soon thereafter, however, the child became anuric and renal tests showed elevations of urea and creatinine. He became hypotensive and developed pulmonary edema. It was decided to initiate hemodialysis when peripheral edema became marked but this was discontinued after 3 hours as a result of increasing hypotension. Laboratory studies now revealed progressive deterioration of liver function and decline in coagulation status.
The patient continued to receive aggressive supportive care but died 48 hours after the original ingestion. At autopsy the larynx was eroded with submucosal necrosis. The entire upper gastrointestinal tract was hemorrhagic and ulcerated. There was also extensive necrosis of the liver and the kidneys. Adrenal cortex was hemorrhagic and the brain was somewhat swollen.

What were the orange crystals that the child swallowed?
a) sodium salicylate
b) ammonium dichromate
c) citric acid
d) barium sulfate

Sodium salicylate is a medicinal agent similar to aspirin. It could be toxic but only in amounts much larger than 1 gram. Citric acid and barium sulfate are also toxic in relatively high amounts. Neither is orange colored nor is significantly toxic in a 1 gram quantity. Barium sulfate is quite insoluble so very little will be absorbed into the circulation. Ammonium dichromate is a very toxic orange colored chemical. Chromium is present in this salt in the more toxic +6 oxidation state.

Questions
Q2. Why was ascorbic acid given?
a) It lessens the absorption of chromium VI (6+)
b) it reduces chromium VI to III (3+) within the gut or blood
c) it may prevent renal failure that occurs from chromium toxicity
d) all of the above
Q3. Why is chromium VI toxic?
a) It selectively inhibits metabolic enzymes found in the liver
b) It interferes with aerobic oxidation of glucose
c) It undergoes intracellular reduction that forms free radicals
d) It undergoes intracellular oxidation with a decrease in available free radicals
Q4. What was this child's cause of death?
a) Chromium-induced liver failure
b) Chromium-induced renal failure
c) Chromium-induced cardiac failure
d) Widespread organ dysfunction
Q5. This child's plasma chromium concentration peaked at 4163 mcg/L. How does this compare with normal levels?
a) slightly above normal
b) 10 fold greater than normal
c) 100 fold greater than normal
d) >1000 fold greater than normal

Since metals are natural products their role in poisoning and toxicology goes back to ancient times. Mercury, lead, and arsenic, in particular, have figured prominently in the history of industrial development and, for arsenic particularly, in the history of crime.
There are many famous episodes involving arsenic. Ironically, one of the best known may not have actually been a case of arsenic poisoning. That would be the alleged murder of Napoleon Bonaparte with arsenic. Napoleon himself suspected it and asserted, " I die at the hands of my enemies ..." Those enemies were not the British who imprisoned him but rather the French monarchy who were most anxious that Napoleon never return to France. Evidence in support of the theory that Napoleon did, in fact, die from arsenic lies mainly in testing of the emperor's hair. Many locks of his hair are still in existence because of the common practice of giving hair to admirer's during the early nineteenth century, the time of Napoleon's imprisonment. The evidence from contemporary hair testing is mixed. Some locks show elevated levels of arsenic. The most recent testing tends to suggest that his hair did not have elevated arsenic. Further, any elevations that may have existed are not necessarily evidence of homicide. This is because of the fact that arsenical pigments were used in the draperies which hung in the emperor's chambers. In the equatorial and humid climate of St Helena, the island of Napoleon's exile, these pigments would have been acted upon by microorganisms and vapors rich in organic arsenicals would have resulted. The final judgment of history is perhaps still not available but it seems that the majority of those who have examined this riddle come down on the side of a natural death. Not only is the chemical evidence ambiguous but the medical conclusion of a large stomach carcinoma was well supported by many witnesses at his autopsy. Lastly, some of the expected findings for chronic arsenical poisoning, such as hyperkeratosis and hyperpigmentation were never observed.

"…brings together toxicology, clinical medicine and bioanalytical sciences in an easily understood narrative to help ensure a greater cross-disciplinary undestanding to support the highest standard of poisoned patient treatment…a useful reference book for undergraduates; it will be especially helpful for post-graduates and physician preparing for professional qualifications. The book could also be of interest to the clinical toxicologists and academic teacher."
-Peter H. Bach, Celltech Research and Development

"For 10 years I taught a graduate course, 'Toxicology and Drug Analysis', and a problem I faced was the lack of a suitable textbook. This problem appears to be solved with the publication of Toxicology: A Case-Oriented Approach. Sixty-three interesting and pertinent case studies are woven through this book, representing a new approach to teaching this often confusing an complicated subject... In short, this book is an excellent resource for teachers, clinical and forensic toxicologists, and physicians practicing emergency medicine."
-James F. Wesley, Monroe County Crime Laboratory

"…a fun book to read and easily involves the reader with a casual narrative style that is great for student learning and rapidly relating information to the emergency room, laboratory, and mechanisms of present-day toxicology. … The 35-page index is a masterpiece … an intriguing and innovative book that holds the reader's attention with unexpected ease. The information is accurate, it is clearly and practically presented, and the reader is left with the nagging feeling that 'This is exciting, and I want to learn more!' What greater tribute can an author and an instructor receive than to be appreciated for a great presentation of a stimulating and dynamic discipline."
- Veterinary and Human Toxicology, December 2002

"…written in an easily understood and enjoyable manner…This book is a unique and valuable attempt to acquaint two different disciplines that commonly depend on each other. Clearly they would be more effective if they had a better understanding of the other's problems. It could be used as a textbook in introductory toxicology courses or adjunctive reading for basic toxicologists. Physicians can learn valuable insights into interpretation of laboratory investigations of their patients. The quality of either discipline's conclusions would be improved by this shared knowledge."
- Sheldon L. Wagner, M.D. in Doody's Notes

"A major strength of this book is its reliance on case studies to stimulate the interest of the reader. These case studies have been carefully selected for their abilities to teach important principles related to toxicology. Also, Fenton includes many interesting anecdotes related to the history of toxicology. This book is thorough and comprehensive in its coverage of the toxicology subject and manages to maintain reader interest through hands-on exercises placed throughout."
- R. Saferstein, Widener University, in CHOICE