The Reformation in Eastern and Central Europe 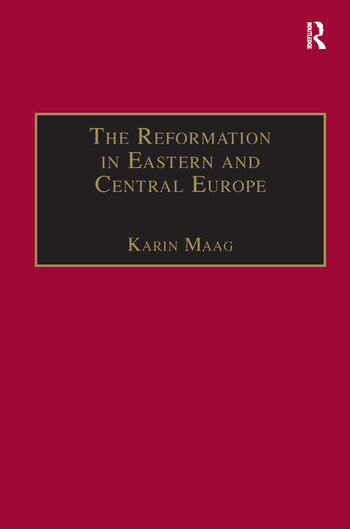 The Reformation in Eastern and Central Europe

This work provides a comprehensive and multi-facetted account of the Reformation in eastern and central Europe, drawing on extensive archival research carried out by Continental and British scholars. Across a broad thematic, temporal and geographical range, the contributors examine the cultural impact of the Reformation in Eastern Europe, the encounters between different confessions, and the blend of religious and political pressures which shaped the path of Reformation in these lands. By making the fruits of their research accessible to a wider audience, the contributors hope to emphasise the important role of eastern and central Europe on the early modern European scene.

Contents: The Reformation in Eastern and Central Europe, Andrew Pettegree and Karin Maag; Pre-Reformation changes in Hungary at the end of the 15th century, Valery Rees; Protestant literature in Bohemian private libraries around 1600, Jiri Pesek; Reformation and the writing of national history in East Central and Northern Europe, Norbert Kersken; Calvinism and estate liberation movements in Bohemia and Hungary (1570-1620), Joachim Bahlcke; Mural painting, ethnicity and religious identity in Transylvania: the context for Reformation, Christine Peters; The image controversy in the religious negotiations between Protestant theologians and Eastern Orthodox Churches, Sergiusz Michalski; Protestantism and orthodoxy in 16th-century Moldavia, Maria Craciun; Church building and discipline in early 17th-century Hungary and Transylvania, Graeme Murdoch; Morals courts in rural Berne during the Early Modern period, Heinrich Richard Schmidt; The Reformation in Poland and Prussia in the 16th century: similarities and differences, Janusz Mallek; Late Reformation and Protestant confessionalization in the major towns of royal Prussia, Michael MÃ¼ller; Patronage and parish: the nobility and the recatholicization of Lower Austria, Rona Gordon Johnston; Index.

'This book fills in gaps in our understanding of developments parallel to those in the West and thus enables us better to assess and analyze the Reformation in every land in Europe. All college, university, and seminary libraries should have this volume.' Religious Studies Review, Vol. 24, No. 3 'this collection makes a fine volume. It should help to bring these crucially important peripheries into more central focus in discussions of the Age of Reform.' Slavic Review, Vol. 57, No. 3 'as an encouragement for further exploration and as a reminder of the importance of the region, this volume makes a valuable contribution to eastern European Reformation studies.' Church History