The Media in Black and White 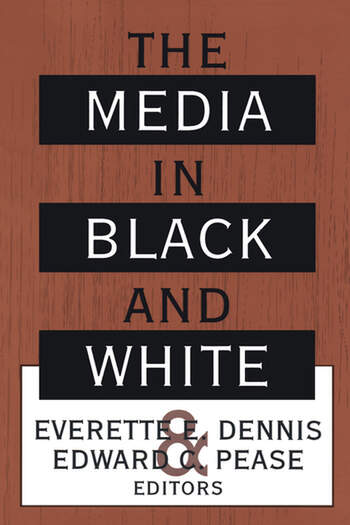 The Media in Black and White

The media's treatment of and interaction with race, like race itself, is one of the most sensitive areas hi American society. Whether hi its coverage and treatment of racial matters or racial connections inside media organizations themselves, mass communication is deeply involved with race. The Media in Black and White brings together twenty journalists and scholars, of various racial backgrounds, to grapple with a controversial issue: the role that media industries, from advertising to newspapers to the information superhighway, play in helping Americans understand race.

Contributors include Ellis Cose, a contributing editor for Newsweek; Manning Marable, chairman of Columbia University's African-American Research Center; William Wong, a columnist for the Oakland Tribune; Lisa Penaloza, a University of Illinois professor; and Melita Marie Garza, a Chicago Tribune reporter. Among the topics discussed are: the quality of reporting on immigrant issues; how sensationalism may be deepening the chasm of misunderstanding between the races; how the coverage of America's drug wars has been marked by racism; and whether politically correct language is interfering with coverage of vital issues and problems.

The contributors of The Media in Black and White hope to broaden the narrow vision of the United States and the world beyond with their contributions to the debate over race and the media. The commentary found hi this important work will be of interest to sociologists, communication specialists, and black studies scholars.

1. Seething in Silence—The News in Black and White
Ellis Cose

"For reporters, race can be a treacherous subject, raising questions that
go to the heart of the journalist's craft," observes the author, a Newsweek
contributing editor and former Media Studies Center fellow. "Today,
though we live in a world that is increasingly multicultural, much of
conventional journalism remains fixated on the lives of the white and the
wealthy." The result, he says, is tension in the newsroom, the news product
and the news consumer.

The 30 years since the zenith of the civil rights movement have brought
a "paradox of desegregation," contends the author, chairman of Columbia
University's African-American research center and author of numerous
books on race in America. Improvements aside, "U.S. race relations
in the 1990s have been unambiguously negative," he writes. "Media,
film and educational institutions have a decisive role to play in overturning
America's pervasive images of inequality."
Part II Covering America

3. Immigration, the Press and the New Racism
John J. Miller

"Immigrants have always made Americans uneasy," as the associate director
of the Center for the New American Community in Washington
points out. That uneasiness is growing in the 1990s as new waves of
illegal immigrants spill over the borders and are accused of a range of
social ills. "The media can't do anything about that. What the media can
do, however, is exacerbate or ease these worries. It all comes down to the
quality of reporting on immigrant issues."

"We have all heard that sensationalism and entertainment values are on
the rise in TV news," writes a Northwestern University researcher. "My
studies indicate these trends aren't simply professional embarrassments
and frustrations for journalists. They may also be making urban America
less governable, deepening the chasm of misunderstanding and distrust
between blacks and whites."

Everyone knows that bad news drives journalism, but the press disproportionately
frames stories about blacks as bad news, a University of
Pennsylvania media scholar finds in a pilot study he conducted. "To the
extent that the media emphasize the ways in which the distribution of
social and economic risks breaks down along racial lines," he suggests,
"they have helped to tear us apart."

Things are looking up in terms of how the press covers America's diverse
new Asian community, writes the author, a former columnist for
the Oakland Tribune. "TV coverage of Asian Americans remains spotty
and sensationalized, but print coverage, while retaining some of the old
polar good-bad images, has become increasingly nuanced, textured and
true to life."

7. In the South—Press, Courts and Desegregation Revisited
Dale Thorn

Forty years after Brown v. Board of Education, the fight over racial
segregation has flared up again, with an ironic twist—back then, blacks
sued to enter white colleges; today they are fighting to keep black colleges
open. "Amid the gaffes and stereotypes by the media, there has
been a real dearth of relatively simple, interpretive, what-it-means reporting
on the South's desegregation story," complains a Louisiana State
University journalism professor.

Coverage of America's "drug wars" has been marked by racism, contend
the authors of a new book on how network television reports on
cocaine. "Journalism's discovery of crack in late 1985 signaled the beginning
of a period of frenzied coverage in which the race and class
contours of the cocaine problem established in the early 1980s would be
almost completely reconfigured," they find.
Part III Issues, Debates and Dilemmas

If Ebony is a "black" magazine, is the New Republic "white"? asks a
Queens College political scientist and author. White journalists and media
organizations don't see race as an essential feature of their identities,
but for blacks, as the author points out, "the dominant media are most
certainly white. To their eyes, the mainstream media speak for a white
nation, which expects all citizens to conform to its ways."

"There is good reason for minorities to think their perspectives are at
best warped by the media or, worse, not heard at all," reflect the acting
communication dean at Howard University and the co-editor. "In the
year that saw a black man elected president of South Africa, there is
irony in the fact that apartheid still rules the information age in America."

America's image of blacks—and their own self-image—is closely tied to
how they are portrayed in news and entertainment, writes the author, a
former New York Times editor who now heads the journalism department
at the University of Alabama. "There is strong objection to many of the
roles and images transmitted—including the clown image of television
sitcoms''new vaudevillians,' but particularly the messages of gangsta
rappers about women as'bitches' and'hos,' and about guns and violence
and cops."

To paraphrase the poet, What's in a name? In theory, substance should
be vastly more important than labeling, but, as the co-editor points out,
language questions are intensely sensitive in the arena of race in America.
"Black" or "African American"? "Native American" or "Indian"? "To
the extent that nit-picking over language interferes with coverage of vital
racial and ethnic issues and problems, this debate may be counterproductive,"
he concludes. But it refuses to go away.
Part IV A Media Industry Status Report

So far, at least, the electronic world of tomorrow looks pretty white,
reflects a former broadcaster and technology expert. "Future archaeologists,
studying the documentary record of the present, would have reason
to conclude that people of color were bypassed by the information superhighway,"
he says. "Maybe it just passed over black and Latino communities,
much as Manhattan's West Side Highway passes overhead on its
way through Harlem neighborhoods."

"Race—it is America's rawest nerve and most enduring dilemma," reflects
the author, a former newspaper editor and journalism professor at
Columbia University. "From birth to death, race is with us, defining,
dividing, distorting." Few social institutions are as tormented by this
dilemma day in and day out as are newspapers, he says, reporting on
efforts by two metropolitan dailies to come to grips with the issue.

"In the advertising world, the representation of minorities has been a topic
of interest that has waxed and waned since the civil rights movement,"
writes a University of Illinois advertising professor. "Yet, so much has
changed in the last 20 years that to view minorities in advertising solely in
terms of inclusions in'mainstream' media is to miss much of it."

"As the United States m