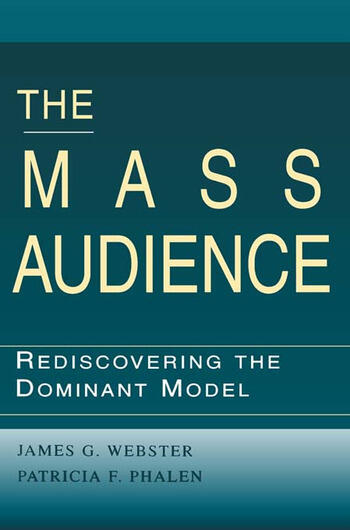 In the early 20th century, a new and distinctive concept of the audience rose to prominence. The audience was seen as a mass -- a large collection of people mostly unknown to one another -- that was unified through exposure to media. This construct offered a pragmatic way to map audiences that was relevant to industry, government, and social theorists. In a relatively short period of time, it became the dominant model for studying the audience. Today, it is so pervasive that most people simply take it for granted.

Recently, media scholars have reopened inquiry into the meaning of "audience." They question the utility of the mass audience concept, characterizing it as insensitive to differences among audience members inescapably bound up with discredited notions of mass society, or serving only a narrow set of industrial interests. The authors of this volume find that these assertions are often false and unwarranted either by the historical record or by contemporary industry practice.

Instead, they argue for a rediscovery of the dominant model by summarizing and critiquing the very considerable body of literature on audience behavior, and by demonstrating different ways of analyzing mass audiences. Further, they provide a framework for understanding the future of the audience in the new media environment, and suggest how the concept of mass audience can illuminate research on media effects, cultural studies, and media policy.

"Clear in its purpose and particularly suitable for undergraduates..."
—CHOICE

"Webster and Phalen have presented communication scholars with a significant 'rediscovery.' They have reframed the issues in such a way that the past is appropriately used to probe the future."
—Journal of Communication

"This is the most conceptually sophisticated and thoroughly informed dissection of the contemporary mass television audience one is likely to find, and all within a manageable compass. It is enormously illuminating on the history of the 'old' and the likely future of 'new' media audiences. It also achieves a rare double--a scholarly book with immediate relevance for the media industry."
—Denis McQuail
University of Amsterdam

"This book will be useful for students, policymakers, and critics of mass communication alike. Their analysis abounds with hypotheses that deserve attention by the scholarly community."
—Steven Chaffee
Stanford University

"This is a long-overdue volume. The 'mass audience' is one of the most widely used -- and least understood -- concepts in media theory. Written in a clear, engaging style, The Mass Audience reveals the evolution of this concept and how it is still relevant for studying today's rapidly changing electronic media environment. Along the way, [the authors] achieve a masterful synthesis of more than four decades of research of audience behavior....Anyone interested in the latest developments in audience theory will find a challenging and indispensable guide in [this volume]."
—Thomas R. Lindlof
University of Kentucky

"...ideal for an advanced course in audiences or programming. It defies the currently popular notion that television is fragmenting into myriad tiny audiences by demonstrating the economic and social inevitability of mass audiences numbering in the millions. It provides a vivid and penetrating exploration of the widely abused term -- audience -- and brings a spotlight to the evidence for related constructs, paradigms, and models. It constructs a two-sided equation of mutual power in which institutions manipulate audiences while audiences simultaneously affect consumer institutions. The book illuminates finely-honed concepts about audiences in language that is both accessible to the tyro and thought-provoking for the advanced scholar."
—Susan Tyler Eastman
Indiana University