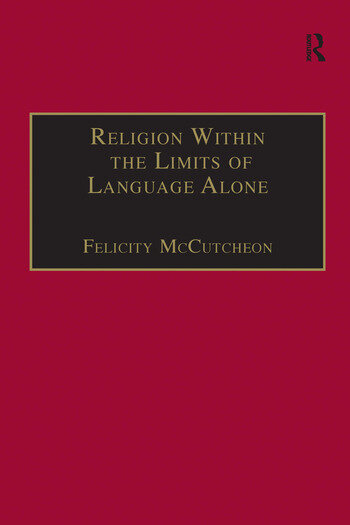 Religion Within the Limits of Language Alone: Wittgenstein on Philosophy and Religion

Contents: Preface; Wittgenstein’s Philosophical Ambition: The pursuit of perspicuity; The goal of the Tractatus; The transition; The goal of the Philosophical Investigations (the elimination of philosophical puzzles); Objectivity and the limits of language; The struggle with language; Perspicuity, Justice and Peace: Philosophical explanations and justice; Seeing connectionsnot causes; Parallels between aesthetics, psycho-analysis and philosophy; What perspicuity achieves; Grammar: Wittgenstein on grammar - exegetical; The development of the concept of grammar; The autonomy of language; Language-games, rules and meaning; Training and Augustine’s infant; Training and the giving of examples; Forms of life and the possibility of meaning; Language as both arbitrary and necessary; Agreement in conventions and agreement in behaviour; What then is meaning?; Grammar, rules and reality; The positivists on grammar and reality; Carnap on meaning and ontology; Wittgenstein on the connection between language and reality; Grammar as the connection between word and world; Wittgenstein on the accountability of grammar to reality; Wittgenstein and ontology; Religious Language as Grammar: Some preliminary remarks; Self-evidence and logic; The nature of basicality; Basicality and truth; World pictures and pictures of the world; The reality of God; Conflating grammar and beliefs; Expressivism: Section One: The cognitive/non-cognitive distinction; The nature of cognitivity; What motivates non-cognitivism or expressivism?; Speaking for oneself; Section Two: Expressive as primitive; Language and reality: some preliminary remarks; Language as expressive behaviour; Concept-formation, behaviour and beliefs; Language, beliefs and reality - concluding remarks; Section Three: Wittgenstein and expressivism; Grammatical differences and substantive disputes; Conclusion; Some Concluding Remarks; Bibliography; Index.

'This book expounds a range of familiar Wittgensteinian themes with particular focus on Wittgenstein's account of 'grammar' and the grammatical status of religious belief. However, McCutcheon interestingly diverges from most other accounts of this material by virtue of the special attention she gives to the question of realism...' Ars Disputandi