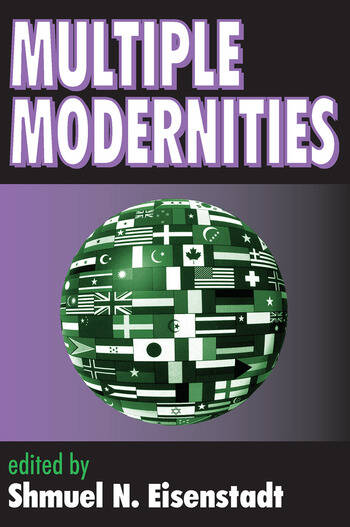 How may we characterize contemporary society in a world so complex? Can looking at the diverse paths followed by various cultures in the modern world generate useful new social scientific typologies, or must a different set of questions be posed in this era of globalization? What, in short, is the nature of modernity? These are some of the questions addressed by the contributors to Multiple Modernities.

Following the theme in an earlier work edited by Shmuel Eisenstadt, Public Spheres and Collective Identities, this book challenges conventional notions of how the world has changed politically, socially, and economically. The authors consider the meaning of modernity in contexts as different as communist Russia, modern India, the Muslim world, Latin America, China and East Asia, and the United States. Miscegenation, transnational migration, technological developments, and changing communications have shifted the ground on which theories of society were once built; political system, diaspora groups, religion, and "classical" theories of modernity have to be reconsidered in a new context.

Authors and chapters include: S.N. Eisenstadt, "Multiple Modernities"; Bjrn Wittrock, "Modernity: One, None, or Many? European Origins and Modernity as a Global Condition"; Johann P. Arnason, "Communism and Modernity"; Nilfer Gle, "Snapshots of Islamic Modernities"; Dale F. Eickelman, "Island and the Languages of Modernity"; Sudipta Kaviraj, "Modernity and Politics in India"; Stanley J. Tambiah, "Transnational Movements, Diaspora, and Multiple Modernities"; Tu Weiming, "Implications of the Jrise of 'Confucian' East Asia"; Jrgen Heideking, "The Pattern of American Modernity from the Revolution to the Civil War"; and Renato Ortiz, "From Incomplete Modernity to World Modernity."

Written in clear and non-technical language for both a scholarly and general audience, this volume confronts the problem of just what constitutes the common core of modernity.