Mortality and Migration in the Modern World 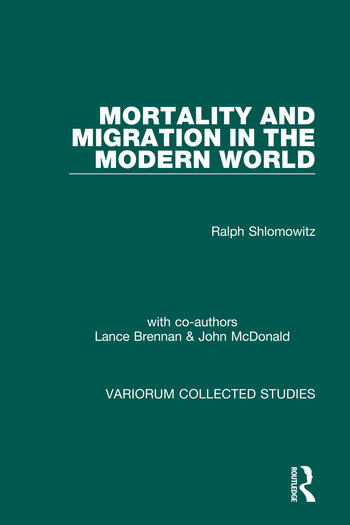 Mortality and Migration in the Modern World

The term 'relocation cost' has been coined by Philip Curtin to refer to the increased mortality associated with the migration of people from their childhood disease environments to new ones. He and others have quantified this cost for a number of migrant populations, notably Africans in the transatlantic slave trade and European tropps posted overseas. The papers in this volume, extend this research agenda by quantifying and analyzing the mortality suffered by other migrant groups, both on their voyage and after their arrival at their destination. The first three studies deal with free and convict European migration to Australia; the following ones with movements of indentured labour, from the mid 19th to the present century: Chinese, African, Pacific Islander, and above all the migration of Indian labour across half of the globe. The collection is introduced by a new essay, setting out the historical context and significance of this research.

’Shlomowitz has put together a valuable book. As one who read these essays when originally written, I was impressed with the strength of the entire body of work. I strongly recommend this book to anyone interested in reading high quality recent work on the mortality of migrants.' The Northern Mariner, Vol. VIII, No. 3