Medicine in a Multicultural Society
Christian, Jewish and Muslim Practitioners in the Spanish Kingdoms, 1222–1610 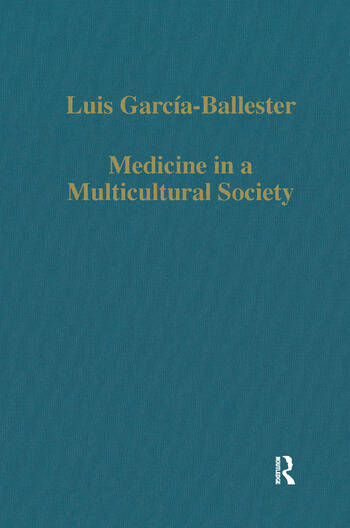 Medicine in a Multicultural Society: Christian, Jewish and Muslim Practitioners in the Spanish Kingdoms, 1222–1610

The present collection by Professor GarcÃ­a-Ballester deals with medicine and science (i.e. natural philosophy) in the Spanish kingdoms of Castile and Aragon between the 13th and the 17th centuries. It includes a new English version of a major study first published in Spanish. While sharing much, including Galenism (which is the subject of a further collection) as a dominant medical doctrine, with other parts of medieval and Renaissance Europe, Spain was unique in having a medical marketplace uniting Christian, Jewish, Muslim and converso practitioners. The complex processes of cultural interchange that resulted form the main theme in this book. Together, these studies have thrown new light on problems of theory and practice, perceptions of health and disease, and the doctor-patient relationship, as well as on the social and legal settings where the healers (physicians, surgeons, barbers, and apothecaries) of these different religious communities were at work.

Contents: Preface; Foreword, Jon Arrizabalaga, Monserrat Cabré and Fernando SalmÃ³n; Christians in a Multicultural Society: Medical science in 13th-century Castile: problems and prospects; Nature and science in 13th-century Castile. The origins of a tradition: the Franciscan and Dominican Studia at Santiago de Compostela (1222-1230); Medical licensing and learning in 14th-century Valencia; Jews in a Christian Society: Jewish appreciation of 14th-century scholastic medicine; Changes in the Regimina sanitatis: the role of the Jewish physicians; Dietetic and pharmacological therapy: a dilemma among 14th-century Jewish practitioners in the Montpellier area; The Threefold Incomprehension: A marginal learned medical world: Jewish, Muslim and Christian medical practitioners, and the use of Arabic medical sources in late medieval Spain; Academicism versus empiricism in practical medicine in 16th-century Spain with regard to Morisco practitioners; The Inquisition and minority medical practitioners in Counter-Reformation Spain: Judaizing and Morisco practitioners, 1560-1610; Index.

’...(has) set the seal on a long and fruitful career devoted to the History of Medicine which only a scholar of the first rank could have accomplished...This fascinating collection is essential reading for those interested in the medieval medicine in the Iberian Peninsula, and the work pays fitting tribute to a lifetime of research.’ Suhayl 'One can only applaud the sensitivity with which are analysed the different claims of Jews, Muslims, and Christians (and various combinations of conversos) to possess medical knowledge... Both volumes together show how much has been achieved in the study of medieval medicine during the last thirty years, to which both scholars contributed greatly.' Medical History '... taken together [these essays] offer a synthetic history, a general interpretation of the social and cultural factors that shaped the course of medicine in Spain over four centuries. No one else has had the insight to assemble such varied materials from the different traditions, much less been able to integrate their stories.' Social History of Medicine '... exceptional... an excellent model of a historiographical approach...' History and Philosophy of the Life Sciences