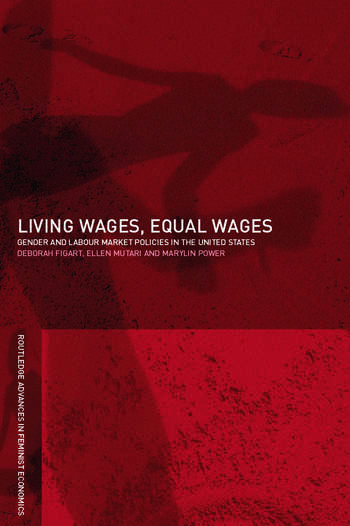 Wage setting has historically been a deeply political and cultural as well as economic process. This informative and accessible book explores how US wage regulations in the twentieth century took gender, race-ethnicity and class into account. Focusing on social reform movements for living wages and equal wages, it offers an interdisciplinary account of how women's work and the remuneration for that work has changed along with the massive transformations in the economy and family structures.
The controversial issue of establishing living wages for all workers makes this book both a timely and indispensable contribution to this wide ranging debate, and it will surely become required reading for anyone with an interest in modern economic issues.

'This book addresses an issue that is particularly timely after years of growing income inequality and draconian decreases in welfare support for single mothers which is likely to work increasing hardship as unemployment rises. The authors deserve credit for making it clear throughout that their concern is not so much with economics, as practised by neoclassical economists, as with political economy. The difference, as they make clear, is that the former takes full cognizance of the importance of social conditions and government policies, not merely market forces, in determining wages. This is an important lesson for an economics profession that has tended to resist any efforts to improve upon a wage structure that rewards some with riches beyond the dreams of avarice and leaves others destitute.' - Marianne Ferber, Professor Emerita, University of Illinois, USA

'Moving from early twentieth-century struggles over minimum wages for both the woman worker and male breadwinner and post-World War II attempts at equal pay through job evaluation and legislation onto recent battles for comparable worth and the living wage, Figart, Mutari, and Power unmask wage setting as a central vehicle for institutionalizing gender and race inequality in the United States. Their focus on the wage as a living, as a price, and as a social practice demistifies the labor market process at a time when employment has replaced income assistance as the goal of welfare policy. Full of theoretical sophistication and historical insight, Living Wages, Equal Wages is feminist political economy at its best.' - Eileen Boris, Hull Professor of Women's Studies, University of California, Santa Barbara, USA

'This well-written book should be adopted in a variety of classes ... Figart, Mutari, and Power ... are very convincing that a feminist wage determination scenario must use wages not only as a price but also as a living and as a social practice for a satisfactory explanation of industrial working conditions of men and women.' - David H. Ciscel, Journal of Economic Issues