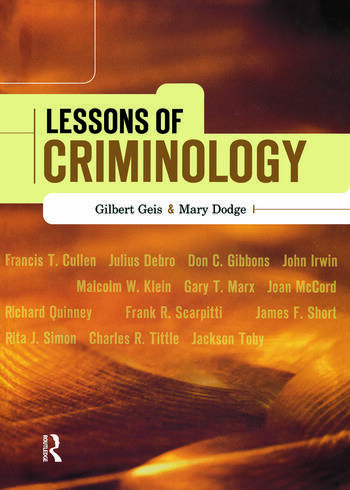 Mary Dodge is Professor in the School of Public Affairs at the University of Colorado, Denver (UCD). She earned a Ph.D. in 1997 in criminology, law, and society from the School of Social Ecology at the University of California, Irvine, and received a B.A. and M.A. in psychology from the University of Colorado at Colorado Springs. Her articles have appeared in Courts and Justice, Contemporary Issues in Criminology, International Journal of the Sociology of Law, The Prison Journal, Police Quarterly, Journal of Contemporary Criminal Justice, and the Encyclopedia of White-Collar and Corporate Crime. Her research and writing interests include women in the criminal justice system, white-collar crime, policing, prostitution, and courts. She teaches a variety of courses; including, Juvenile Justice Administration, Criminological Theory, Judicial Administration, White-Collar Crime, Research Methods, and Women and Crime. Dr. Dodge was the 2007 recipient of the campus-wide UCD Excellence in Teaching Award. She received the SPA Teaching Award in 2001, 2005, and 2006 and the SPA Research and Creative Activities Award in 2002 and 2004.

Gilbert Geis was Professor Emeritus in the Department of Criminology, Law, and Society at the University of California, Irvine. He was a former president of the American Society of Criminology and recipient of its Edwin H. Sutherland Award for outstanding research, and was given research awards by the Association of Certified Fraud Examiners, the Western Society of Criminology, the American Justice Institute, and the National Organization for Victim Assistance. Geis received his undergraduate degree from Colgate University and his Ph.D. from the University of Wisconsin. Before joining the Irvine faculty, he taught at the University of Oklahoma and California State University, Los Angeles. Geis published more than 400 articles on various aspects of crime and criminal justice.