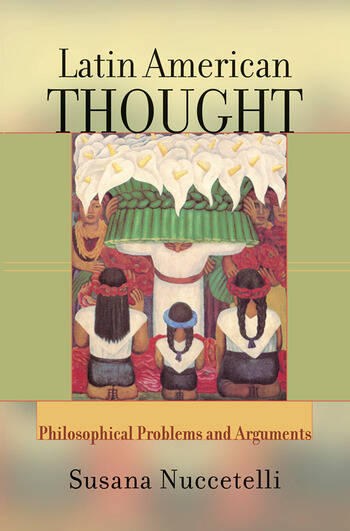 Latin American Thought examines the relationship between philosophy and rationality in Latin American thought, the nature of justice, human rights, and cultural identity, and other questions that have concerned Latin American thinkers from the colonial period to the present day. From the Mayans, Aztecs, and Incas to the present day, reveals the assembly of interesting philosophical arguments offered by Latin Americans. Nuccetelli traces Latin American thought through questions concerning rationality, gender discrimination, justice, human rights, reparation for historically dispossessed peoples, and relativism vs. universalism - all matters of continuing concern in Spanish and Portuguese-speaking parts of the world . Amongst issues of heated controversy from the early twentieth century to the present, also explores how Latin Americans and their descendants abroad think of their own cultural identity, of US mass-culture and philosophy, and of the vexing problem of which name, if any, to use when referring to this exceedingly diverse ethnic group.

Many of the philosophical questions raised by Latin American thinkers are problems that have concerned philosophers at different times and in different places throughout the Western tradition. But in fact the issues are not altogether the same - for they have been adapted to capture problems presented by new circumstances, and Latin Americans have sought resolutions in ways that are indeed novel. This book explains how well-established philosophical traditions gave rise in the "New World" to a distinctive manner of thinking. There was no clean sweep of the past and an attempt to start over: rather, Latin American thinkers mostly welcomed European ideas at whatever pace such traditions happened to arrive. It is then no surprise that, for instance, Scholasticism became the accepted view under Spanish rule, and began to lose its grip only when the rulers did.

But what does seem surprising is the radical way in which those traditions were transformed to account for problems that, though familiar, were now seen intake light of new circumstances. A distinctive Latin American way of thinking about such problems emerged from the project of "recycling" European philosophical traditions, some of which were already obsolete in Europe at the time their transplant took place. Thus theories commonly taken to be incompatible within Western traditions in philosophy were absorbed by Latin American thought-- and, in their newly acquired forms, such theories are even now at the basis of proposed solutions to many practical and philosophical problems.

The book explores that recycling process. Above all, it aims to determine whether the various cultures that met in the "New World" could now be said to have come to share a common identity. This is in fact an issue which has preoccupied Latin Americans since at least the beginning of the 19th century, when their countries won their independence. But, in connection with this, it is also important to ask how Latin Americans have thought about the relationship between philosophy and rationality, and about other issues belonging to the major areas of philosophy such as epistemology, moral philosophy, and political philosophy, as well their application to vital social issues, including education and the emancipation of women. These are all taken up by the author, who pays special attention to questions of gender discrimination, justice, human rights, reparation for historically dispossessed peoples, and the role of education-- all matters of continuing concern in Latin American thought, from its earliest stirrings to the present day.

Preface -- The Epistemic Practices of Latin American Indians: A Puzzle for Philosophers -- Could the Mayans Think? And What About Us? -- Native Folk Cosmologies Versus Western Philosophy and Science -- The Legacy of 1492: Pluralism, Relativism, and the Clash of Cultures -- Thomistic Philosophy and the Conquest: Human Rights in the New World -- Iberian Scholasticism and Its Critics: From Colonial Rule to Independence -- Latin Americans, North Americans, and the Rest of the World -- Latin American Identity: Ethnicity, Name, and Thought