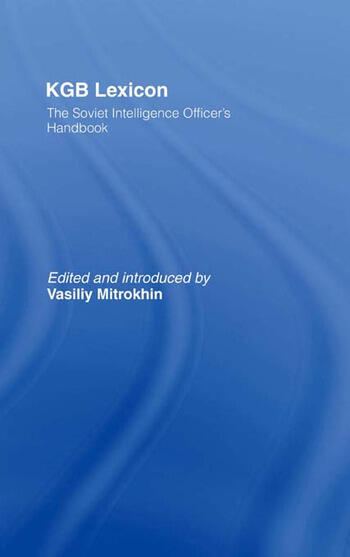 In this volume Mitrokhin presents two dictionaries produced by the KGB itself to define their activities in both offensive and defensive intelligence work. The translated documents tell the story of the KGB's methods and targets and should interest the general public as well as the specialist.

The Times: "The most remarkable recent book on Soviet intelligence ... an indispensable guide to KGB operational techniques, and to its mindset and that of the regime which it served" (Christopher Andrew)

"from the unfree society that was our major opponent, the courage of Vasiliy Mitrokhin has conjured up a pair of text-books, each having legal force within the Soviet secret service...he prints in translation what he managed to smuggle out ten years ago in Russian: the handbooks for intelligence and counter-intelligence used by the KGB"

" a unique insight into the KGB and its works......a unique contribution to our understanding of the evil empire at work both at home and abroad"

"Does he have to spell out the audacity and bravery exhibited by a man who was already seventy years old?... These materials in their raw state are so astonishingly potent..."

"This important book adds to our understanding of the Soviet regime, in which the intelligence agencies were the most important lever of power and it presents us with a unique insight into the day by day running of the world"s most feared intelligence organization."