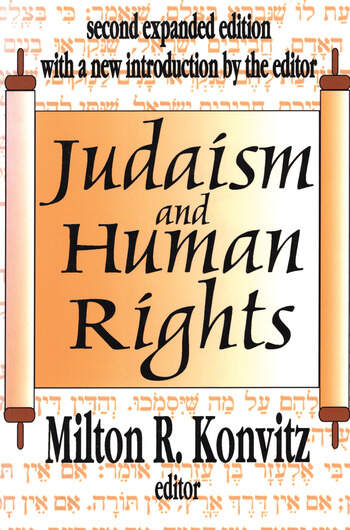 Areligion or a culture like Judaism, at least three thousand years old, cannot be expected to be all of one piece, homogeneous, self-contained, consistent, a neatly constructed system of ideas. If Judaism were that, it would have died centuries ago and would be a subject of interest only to the historian and archaeologist. Judaism has been a living force precisely because it is a teeming, thundering, and clamoring phenomenon, full of contrary tendencies and inconsistencies. Although there are no words or phrases in Hebrew Scriptures for "human rights," "conscience," or "due process of law," the ideals and values which these concepts represent were inherent in the earliest Jewish texts.This volume begins with four essays on the concept of man's being born "free and equal," in the image of God. The underpinning of this concept in Jewish law is explored in Section 2, entitled "The Rule of Law." Section 3, "The Democratic Ideal," traces the foundations of democracy in the Jewish teachings in the Bible and the Talmud, which in turn influenced the whole body of Western political thought. Relations between man and man, man and woman, employer and employee, slave and master are all spelled out. Section 4 presents essays analyzing man's freedom of conscience, and his God-given rights to dissent and protest. Section 5 deals with aspects of personal liberty, including the right of privacy. Section 6, entitled "The Earth is the Lord's," deals with the Jewish view of man's transient tenancy on God's earth, his obligations not to destroy anything that lives or grows, and to share the earth's bounty with the poor, the widowed, and the orphaned. Section 7 delivers an analysis of the "end of days" vision of Micah and man's continuing need to strive for peace and not for war. The volume concludes with three new essays, dealing with contemporary issues: "In God's Image: The Religious Imperative of Equality under Law"; "The Values of a Jewish and Democratic State: The Task of Reaching a Synthesis"; and "Religious Freedom and Religious Coercion in the State of Israel."This enlarged edition is accessibly written for a general and scholarly audience and will be of particular interest to political scientists, historians, and constitutional scholars.