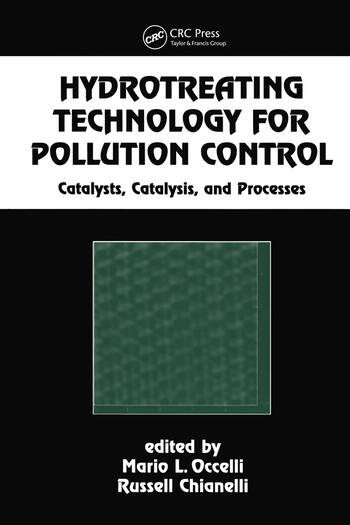 "Based on the American Chemical Society's Second Symposium on Advances in Hydrotreating Catalysts, held in Washington, D.C. Offers comprehensive coverage of the most recent progress in catalysis by transition metal sulfides for the creation of more environmentally safe catalysts and processes. Written by over 70 acclaimed experts from various fields."

A unified theory of periodic and promotion effects in transition metal sulphate hydrodesulfurtization catalysts; a review of some specific phases as possible active hydrotreating constituents; catalytic sites and heterolytic reaction mechanisms in hydrotreating catalysis; microstructural characterization of molybdenum disulphide catalysts; STM and AFM studies of transition metal chalcogenides; HREM characterization of MoS2, MoS2:Co, and MoS2:Fe; on the identification of Co-sulphate species in sulfided supported Co and CoMo catalysts; properties of MoS2-based hydrotreating catalysts modified by electron acceptor additives (P, Na, Cs, F); modelling HDS catalysis with sulfido bimetallic clusters; evidence for H2S as active species in the mechanism of thiophene hydrodesulfurization; role of the sulfiding procedure on activity and dispersion of nickel catalysts; ruthenium sulphate based catalysts; comparison of sulfided CoMo AL2O3 catalysts in hydrodesulfurization of gas oil fractions and model compounds; competitive conversion of nitrogen and sulphur compounds in naphtha with transition metal sulphate catalysts; the effect of additives and impregnation stabilizers on hydrodesulfuritation activity; molten salt preparation of mixed transition metal on zirconia: application to hydrotreating reactions; the role of hydrogen in the hydrogenation and hydrogenolysis of aniline on the nickel single crystal surfaces: its applications on the mechanisms of HDN reactions; hydrodenitrogenation of carbazole on a alumina-supported molybdenum nitride catalyst; aromatics hydrogenation over alumina supported Mo and MiMo hydrotreating catalysts; applications of pillared and delaminated interlayered clays as supports for hydrotreating catalysts; catalytic hydrotrating with pillared synthetic clays; residual oil hydrotreating catalyst rejuvenation by leaching of foulkant metals: effect of metal leaching on catalyst characteristics and performance; characterization of coke on spent resid catalyst from ebullating bed service and its effect on activity; microbial removal of organic sulphur from fuels: a review of past and present approaches.