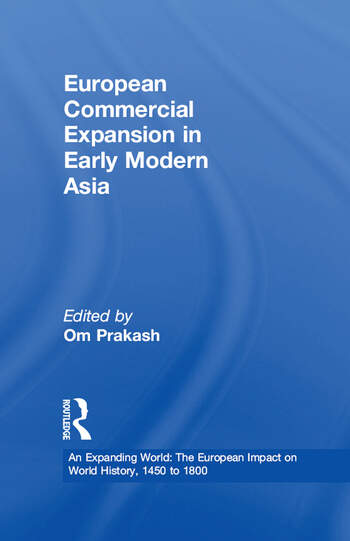 Regular commercial contacts between Europe and Asia date back to at least the early years of the Christian era, but the pattern of trade underwent a structural modification following the Portuguese discovery of a route to the East Indies via the Cape of Good Hope. This volume illustrates the consequences of the arrival of large numbers of Europeans in the East. Europeans both participated in, modified and exploited existing trade relationships in the Indian Ocean and the Pacific. The studies reprinted here show how some environments, such as Japan, were hostile, whilst most states welcomed the European commercial contact. The necessity for Europeans to pay for Asian goods using precious metals is emphasised by the inclusion of articles in monetary transfers in Asian trade, a phenomenon which provides a link between economic developments in the Americas and those in Asia from the 16th century onwards.

Contents: Introduction; The Portuguese: Navigation between Portugal and Asia in the 16th and 17th centuries, T. Bentley Duncan; The Portuguese in the seas of the Archipelago during the 16th century, Luis Filipe F. R. Thomaz; The Coromandel Malacca trade in the 16th century: a study of its evolving structure, Sanjay Subrahmanyam; Portuguese country traders in the Indian Ocean and the South China Sea c.1600, George B. Souza; The Portuguese and the Dutch: The maritime trade of Indonesia: 1500-1800, Arun Das Gupta; Trade in a culturally hostile environment: Europeans in the Japan trade, 1550-1700, Om Prakash; The Dutch: The Dutch East India company and its Coromandel trade 1700-1740, Sinnappah Arasaratnam; The Dutch East India Company and its intra-Asiatic trade in precious metals, Femme S. Gaastra; Trade between Mughal India and the Middle East, and Mughal monetary policy, c.1600-1660, H. W. van Santen; Dutch commercial policy and interests in the Malay Penninsula, 1750-1795, Sinnappah Arasaratnam; The English: The trade of the English East India Company in the Far East, 1623-1684, D. K. Bassett; Private British trade in the Indian Ocean before 1800, P. J. Marshall; British ’country’ trade and local trade networks in the Thai and Malay states, c.1680-1770, D. K. Bassett; The French: French country trade on Coromandel, 1720-1750, Catherine Manning; The Danish: The Danish Asia trade, 1620-1807: value and volume, Ole Feldbaek; Index.