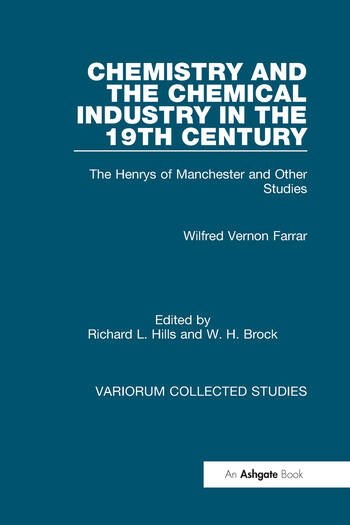 Chemistry and the Chemical Industry in the 19th Century: The Henrys of Manchester and Other Studies

This volume opens with a series of articles making up a monographic study of the Henry family of Manchester, a dynasty that was active in science, medicine, education and industry from the 1760s to the 1830s. This work is important in studying the relations between science and industry, and not least because it emphasises just how much can be learnt from looking at ’second-rank’ figures in the provinces. The second group of papers pursues topics in the history of 19th-century chemistry and the development of the chemical industry, in particular that dealing with synthetic dyestuffs.

’This book is a welcome addition to the Variorum Collected Studies Series and serves as a timely reminder of the great debt that we owe to a historian of chemistry who pioneered the study of regional themes and lesser events and individuals.’ Bulletin of the History of Chemistry, Vol. 22 ’Farrar’s work is a major contribution not only to the history of chemistry, but to history more generally.’ Canadian Journal of History, Vol. XXXIII ’This collection is an important one for historians of chemistry, and for historians of nineteenth-century society, especially in Britain.’ Annals of Science, Vol. 56