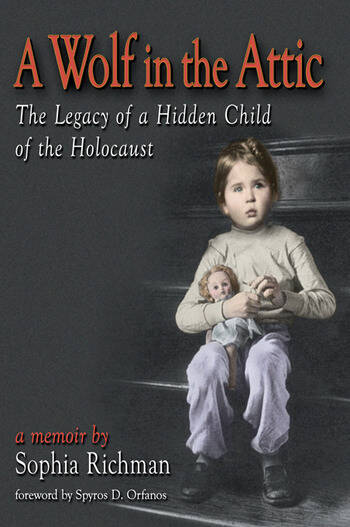 A Wolf in the Attic: The Legacy of a Hidden Child of the Holocaust

A Wolf in the Attic: Even though she was only two, the little girl knew she must never go into the attic. Strange noises came from there. Mama said there was a wolf upstairs, a hungry, dangerous wolf . . . but the truth was far more dangerous than that. Much too dangerous to tell a Jewish child marked for death. One cannot mourn what one doesn’t acknowledge, and one cannot heal if one does not mourn . . . A Wolf in the Attic is a powerful memoir written by a psychoanalyst who was a hidden child in Poland during World War II. Her story, in addition to its immediate impact, illustrates her struggle to come to terms with the powerful yet sometimes subtle impact of childhood trauma.In the author's words: “As a very young child I experienced the Holocaust in a way that made it almost impossible to integrate and make sense of the experience. For me, there was no life before the war, no secure early childhood to hold in mind, no context in which to place what was happening to me and around me. The Holocaust was in the air that I breathed daily for the first four years of my life. I took it in deeply without awareness or critical judgment. I ingested it with the milk I drank from my mother’s breast. It had the taste of fear and despair.”Born during the Holocaust in what was once a part of Poland, Sophia Richman spent her early years in hiding in a small village near Lwów, the city where she was born. Hidden in plain sight, both she and her mother passed as Christian Poles. Later, her father, who escaped from a concentration camp, found them and hid in their attic until the liberation.The story of the miraculous survival of this Jewish family is only the beginning of their long journey out of the Holocaust. The war years are followed by migration and displacement as the refugees search for a new homeland. They move from Ukraine to Poland to France and eventually settle in America. A Wolf in the Attic traces the effects of the author’s experiences on her role as an American teen, a wife, a mother, and eventually, a psychoanalyst. A Wolf in the Attic explores the impact of early childhood trauma on the author’s:

Repeatedly told by her parents that she was too young to remember the war years, Sophia spent much of her life trying to ”remember to forget” what she did indeed remember. A Wolf in the Attic follows her life as she gradually becomes able to reclaim her past, to understand its impact on her life and the choices she has made, and finally, to heal a part of herself that she had been so long taught to deny.