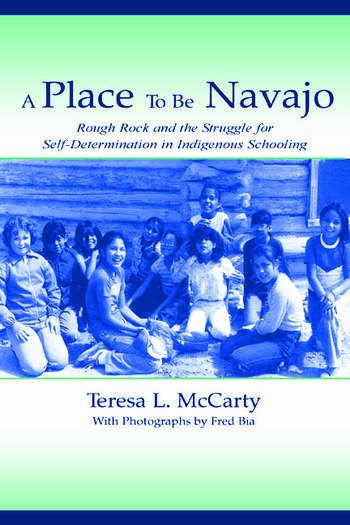 A Place to Be Navajo: Rough Rock and the Struggle for Self-Determination in Indigenous Schooling

A Place To Be Navajo is the only book-length ethnographic account of a revolutionary Indigenous self-determination movement that began in 1966 with the Rough Rock Demonstration School. Called Diné Bi'ólta', The People's School, in recognition of its status as the first American Indian community-controlled school, Rough Rock was the first to teach in the Native language and to produce a body of quality children's literature by and about Navajo people. These innovations have positioned the school as a leader in American Indian and bilingual/bicultural education and have enabled school participants to wield considerable influence on national policy. This book is a critical life history of this singular school and community.

McCarty's account grows out of 20 years of ethnographic work by the author with the Diné (Navajo) community of Rough Rock. The story is told primarily through written text, but also through the striking black-and-white images of photographer Fred Bia, a member of the Rough Rock community. Unlike most accounts of Indigenous schooling, this study involves the active participation of Navajo community members. Their oral testimony and that of other leaders in Indigenous/Navajo education frame and texture the account.

Informed by critical theories of education, this book is not just the story of a single school and community. It is also an inquiry into the larger struggle for self-determination by Indigenous and other minoritized communities, raising issues of identity, voice, and community empowerment. A Place To Be Navajo asks whether school can be a place where children learn, question, and grow in an environment that values and builds upon who they are. The author argues that the questions Rough Rock raises, and the responses they summon, implicate us all.

Contents: J. Spring, Series Editor Foreword. J.A. Fishman, Foreword. Preface. Framing the Story. People, Place, and Ethnographic Texts. "How It Was." "We Were Going to School Being Taught Only by Anglos." A Portrait of Change. Origin Stories. Community and Classroom. The Problems and Politics of Program Evaluation. The Two Faces of Self-Determination. Transitions and Turmoil. "If We Want to Be Powerful, We Have to Exercise Our Power": Indigenous Teachers as Change Agents. Protest. "What If the Children Forget the Navajo Language?" Epilogue:"The Hopes and Dreams of Rough Rock."

"McCarty has been a researcher, collaborator, and interpreter at Rough Rock since 1980, and, as such, brings a unique perspective to the school and its community....This candid account of the history of Rough Rock raises compelling questions. McCarty has written more than the story of a single community and its school; her book addresses the larger struggle for voice, power, and self-determination by indigenous and minority communities."
—American School Board Journal

"McCarty must be applauded for her deft interweaving of ethnographic detail, historical facts, and pedagogical method and theory in this exceptionally sensitive book-length account of an indigenous self-determination movement....Remarkably, McCarty accomplishes the goals she sets out for herself-this book is a must read for anyone genuinely interested in indigenous language retention, bilingual/bicultural education, multiculturalism, or public policy."
—Anthropology & Education Quarterly

"Highly recommended for all academic and general readers interested in indigenous schooling."
—CHOICE

"A Place to Be Navajo is at once many things: a meticulously documented case study spanning more than 30 years of education within the Rough Rock community on the Navajo reservation; a searing indictment of the treatment of the Navajo Nation by successive federal governments that draws on the vivid and poignant recollections of survivors; and a personal narrative that powerfully draws readers into the author's own experience as researcher, advocate, and chronicler of the community's struggle for self-determination....McCarty's narrative is gripping. The two faces of self-determination are at once inspiring and infuriating. The Rough Rock case study has much to teach policymakers, researchers, educators, and bureaucrats about the process of educational improvement."
—Contemporary Psychology APA REVIEW OF BOOKS

"Although set in one location, the book can be viewed as not being just about one school, rather, it documents a turning point in Indigenous schooling and self-determination. The book is intended to engage a wide audience including 'educators, anthropologists, sociologists, language and literacy specialists, policy analysts, and scholars in American Indian and Ethnic Studies'. And it does by raising issues such as self-determination, teacher empowerment, evaluation and assessment, bureaucracy and funding, language policy, and power relations. On a personal note, this is a book I found moving and difficult to put down."
—International Journal of Bilingual Education and Bilingualism

"It is as rare as it wonderful that an extraordinary story of a Native American community's struggle to achieve self-determination in education and to keep that spirit and that determination alive against all kinds of bureaucratic obstacles, internal strife, and external political, cultural , and economic pressure is captured and portrayed by a writer with the talent, sensitivity, commitment, and eloquence that nearly equals the extraordinary nature and significance of the story itself. Such is what one finds in the book A Place to be Navajo written by Teresa McCarty."

"Using striking black-and-white photographs and providing detailed interview excerpts and documentation, McCarty takes the reader through an emotional journey of a revolutionary indigenous movement....McCarty recounts how the school endured numerous ups and downs in its mission to retain and celebrate Navajo culture, language, and tradition."
—Language Arts

"All Native American peoples have a debt of gratitude to the Rough Rock community and all those who worked to move their dream forward. Teresa McCarty is among those people. Now with the publication of this book of hers contracted by the Rough Rock School itself, we are provided further direction. The sharing of Rough Rock's history brings into high relief those areas that we all need to address in order to make indigenous language and culture-based schooling an even greater success."
—Language, Culture and Curriculum

"This is a very successful chronicling of the path of the Rough Rock community....This book will appeal to the tribal members of many nations of our land, students, parents, and elders. It will also be a reference work for those who work in the educational systems serving the American Indian people. It should be required reading for anthropologists, sociologists, language and literacy specialists, and anyone (citizens, politicians, policymakers, and curriculum makers) who have a vote on critical issues in education in the United States."

"This moving narrative provides the reader with an in-depth glimpse of the listening and telling of those who would not otherwise be heard; the author clearly illutrates the inspiration of a Navajo community to create a school that is a place to be Navajo."
—Multicultural Review

"This book will no doubt become a classic in studies of education."
—Bernard Spolsky
Bar-Ilan University

"A Place to Be Navajo is a particularly rich biography of the first community-controlled school in the Navajo Nation in northern Arizona. Teresa McCarty has been working with the school's staff for more than two decades, and her book should be read as a principled model of such outsider/insider collaboration. Rough Rock is famous among people interested in Indian schooling and/or community control of education. Its story is of considerable contemporary as well as historic significance. The lessons to be learned for all attempts at local control (indigenous or otherwise) are extremely important."
—Courtney Cazden
Harvard Graduate School of Education

"A magnificent book!...It has not just a masterful command of an incredible variety of sources and a lot of insight....It also has a great deal of heart."
—Wayne Holm
Navajo Nation Language Project

"In this book, Teresa McCarty sets a new standard for writing about Native American education. She attentively, respectfully, and honestly presents the words, voices, and perspectives of Navajo parents, students, educators, administrators, school board members, and politicians--all the varied members of the remarkable community of Rough Rock, Arizona, home of the best known community-based school to emerge in Indian country in the last century. Rough Rock has often been lauded as an exemplary 'experiment' in American Indian education, as if it flourished, and then faded away, under controlled and clean laboratory conditions. The story of Rough Rock, as McCarty so expressively reveals, is much messier, more inspirational, and more enduring than the story of an 'experiment.' It is the story of a Navajo community reclaiming its own; its own place, its own language, its own children. The story of Rough Rock points the way toward a future that all Native Americans, indeed all Americans, dream of--a future of community empowerment, excellence in schooling, and fulfilled, healthy, children."